What makes a bird a bird?  Feathers.  Birds are the only animals that have feathers and they come in many sizes, colors, and shapes.  They also serve many purposes, too. Here you will learn about the parts of a feather, why birds have different feathers, and some interesting facts.  After you have read through the different sections on feathers, try the downloadable worksheet to see how much you have learned.

Feathers come in many different shapes, but all of them can be classified into six different types of feathers. The feathers we are used to seeing are flight and contour. Down feathers are what we use in pillows, quilts, and jackets. The other three feathers, semiplume, filoplume, and bristle, are not as common, but still useful to birds. Contour feathers give shape and color to the bird. They are found everywhere except the beak, legs, and feet. Contour feathers are colored only at the ends (the only part that we see). At its base, a contour feather becomes downy which helps insulate the bird. Down feathers have little or no shaft. They are soft and fluffy. Down feathers help insulate birds by trapping air. Some birds, such as herons, have special down feathers called powder down which breaks up into a fine powder. The bird then spreads this fine powder all over its body to act as a water repellent. Parts of a Feather 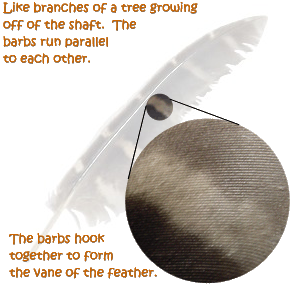 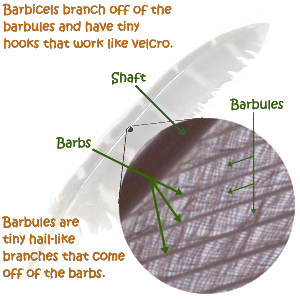 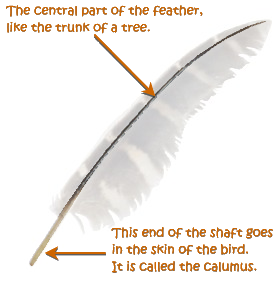 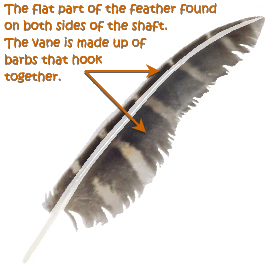 Feathers come in every color of the rainbow. Most colors are caused by a pigment, just like food coloring being added to frosting. If you add drops of red food coloring (the pigment) the frosting turns a reddish color. The same works for the color yellow. But there is a problem with the last primary color, blue. In feathers, there is no blue pigment. So how can a Blue Jay appear blue if it has no blue pigments?
The answer is found in the structure of the feather, or the way the feather is designed. When light hits the blue feather (remember that white light has all of the colors of the rainbow) the feather is designed to reflect back only the blue light to our eyes. This can be shown in a simple experiment. If you take a blue feather and shine a flashlight on it from the top, you will see the bright blue. However, if you shine the light from underneath the feather, the blue color disappears. If you repeat this experiment with a red feather, the feather will appear red no matter which direction the light passes through the feather. Look at the photos taken below of a Blue Jay feather and a Red-lored Amazon Parrot. 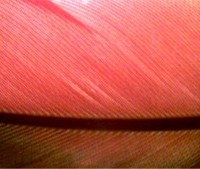 Red-lored Amazon feather with light shining from below. Notice how the feather looks red no matter which way the light is shining. 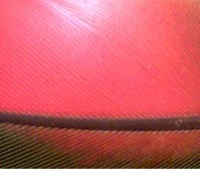 Red-lored Amazon feather with light shining from above 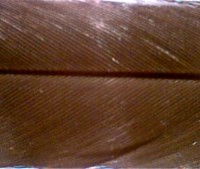 Blue Jay feather with light shining from underneath. Notice how all of the blue has disappeared 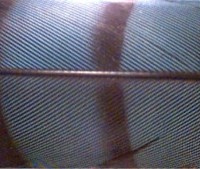 Blue Jay feather with light shining from above

So how are green feathers made?  Touracos are the only bird that can produce green pigments.  All other green birds use a combination of pigments and reflecting blue wavelengths.  Can you figure out what color pigment is needed to make green when mixed with the blue wavelengths?  If you guessed yellow, you are correct.  The wing at the top of this page has yellow pigments but also reflects blue light.  This makes our eye see the color green.

There are so many different ways that birds use feathers that there is no way they can all be listed here.  This page will let you know the most common uses and a few that are odd but interesting.

Obviously, birds use feathers to fly.  The long flight feathers help propel the bird through the air, while the contour feathers make the rest of the bird streamline.

Some birds can move their brightly colored feathers in a way that attracts a mate. Peacocks can fan their upper tail covert feathers producing a beautiful bluish green fan. Other birds, such as the Eastern Kingbird, have a stripe of colorful feathers hidden underneath the contour feathers on top of their head. The Eastern Kingbird displays these bright yellow feathers only when trying to find a mate.

Believe it or not, Ptarmigans (birds that live in the snow) have feathers on their feet that act like snowshoes. These feathers help the birds from falling through deep snow.

The Snowy Owl blends in perfectly with a snowy field

The Sandgrouse, a bird that lives in the desert, dips its breast feathers into water and then flies to its chicks where they will suck the water off the parent’s feathers.

During the colder months, feathers help insulate birds to keep them warm. Also, during the hot months feathers can help keep the bird cool. Some birds that live in colder areas, such as Redpolls, have up to 30% more feathers during the winter than summer.

Some birds produce sounds using their feathers.  The Ruffed Grouse flaps its wings while standing on a hollow log to produce a drumming sound (and the hollow log makes the sound louder as it echoes inside).  Nighthawks and Snipe dive towards the ground and pull up at the last second to produce an unusual ‘growl-like’ sound.  This sound is made as air travels quickly over the wing feathers.

Some birds don’t want to be seen, so their feathers help them blend in with their habitat. Owls, for example, can easily blend in with bark as they push their bodies up against a tree’s trunk. The Snowy Owl, which lives where there are no trees, blends in perfectly with a wintry scene.

Owls have special serrated flight feathers on their wings that help them fly silently. The serrated edge breaks up the air as it moves over the wing reducing the amount of noise. Ducks and doves, on the other had, have a very smooth leading edge to their wing, and therefore produce a loud whistling noise when flying.

Snowy Egret displaying upper tail coverts. In the early 19th century, this bird was hunted for its feather which were used in women’s hats.

Some birds, like the Dark-eyed Junco, have bright feathers on the outside of their tail which they flash when being chased. They then cover these feathers and quickly turn the other way while trying to lose their predator.

Feathers help protect the bird’s delicate skin.  Without feathers, a bird would be cut badly if it flew into a thick bush.  Some birds, such as Hornbills, even have bristle feathers that act like eyelashes which protect the bird’s eyes

Close-up of a Hornbill’s “eyelashes”

Feathers and the Law

In the early 20th century, birds were being hunted for their feathers. These feathers were used to decorate women’s hats. Some species with beautiful plumes, such as the Snowy Egret, had very low populations.

Fortunately, the Migratory Bird Treaty Act of 1918 helped save many species of birds. The Migratory Bird Treaty Act is a commitment by four countries to protect birds that are regularly found in each country. These countries are: United States, Russia, Japan, and Mexico. This act made it illegal to collect or possess any bird, feather, egg, or nest.

Birds that are found in the United States that are not protected by any laws include the House Sparrow, Rock Pigeon, and European Starling. These three species are not native to our country. They were brought here from Europe.

So if you find a beautiful feather laying on the ground what should you do? The best thing is to pick it up, study and enjoy it, and then put it back where you found it. The same thing goes for any abandoned eggs or nests you find. In order to keep any part of a bird, you need to have two special salvage permits. One from the state where you are collecting birds, and the other from the federal government.